Locks were scarce in the Colonies during the mid 18th century; those available were imports from or copies of European mechanisms. Security concerns increased with the founding of the Republic and the subsequent prosperity, giving rise to demand for locks that seeded the American lock industry. American lock makers developed and patented more than 3,000 devices between 1774 and 1920 with an emphasis on security and aesthetic appeal. Rim locks, also known as box locks, were imported into the United States until the early 19th century making it difficult to identify earlier native crafted locks. 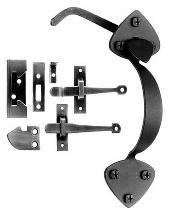